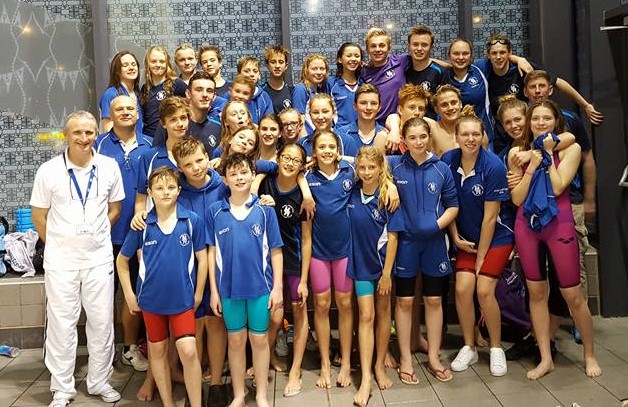 So much of the tone of the competition is set by the opening 200 IM races, and despite swimming up an age group both Alice Fender and Sam Gaines got us off to a great start, setting PBs and new age group records.

First places were achieved by the girls u16 free relay team of Shona McKenna (setting a new age group record for the 50 free in the lead leg), Izzy Anderton, Georgia Purkis and Alice Fender.  Jack Spence was in imperious form winning both the open 100 back and free, whilst Jack Christie won the open 100 breast in a new Club open record time.  Joe Coldwell improved his 100 breast age group record set only 2 weeks ago.

The biggest single improvement on the night was set by Kyle Holmes with a huge 4 second PB in the 100 fly.  Millie Herbert improved both her 100 fly and 50 free relay lead leg by over 2 seconds.  Tilly Beckwith knocked nearly 2 seconds off her 50 back PB in the medley relay and is now swimming at Regional qualifier pace and also improved her 100 free by 1.7 seconds – earlier in the week she wasn’t feeling well and was a doubtful starter so we look for great things when she is fully fit!  Shona McKenna improved her 100 back time by almost 2 seconds, Sam Ward improved his 100 back time by 1.75 seconds, Lewis Clark improved his 100 free by 1.4 seconds and Henry Newbury-Kemp improved his 50 breast by a second.  Overall ten regional qualifying times were set or improved.

Special mentions must be made of Nathan Whiting who wasn’t feeling at all well on Saturday morning but still turned up and swam two individual and two relay races, to Mason O’Brien and Chris Cox who stepped in at incredibly short notice when there were drop outs on the day, to Leanne Abrey who swam the 100 fly in both her age group and the open within ten minutes, and then the 50 fly leg in the medley relay.  And the team’s success wouldn’t have been possible without the sterling efforts of Millie Anderton, Dylan Kennell, Niall Marsden and Emily Young.

Congratulations to Head Coach Oliver for a successful first season of Arena League and thanks to the support team of Lauren Wilding, Alan Coldwell, Monica Fender (on her birthday), George Cawley and Hayley McKenna.  And finally to Vic Coombs and Sarah Young who were the unsung heroes who officiated and allowed us to meet our obligations to the league, and to everyone who has helped and supported the team this season.

previous
November swimmers of the month