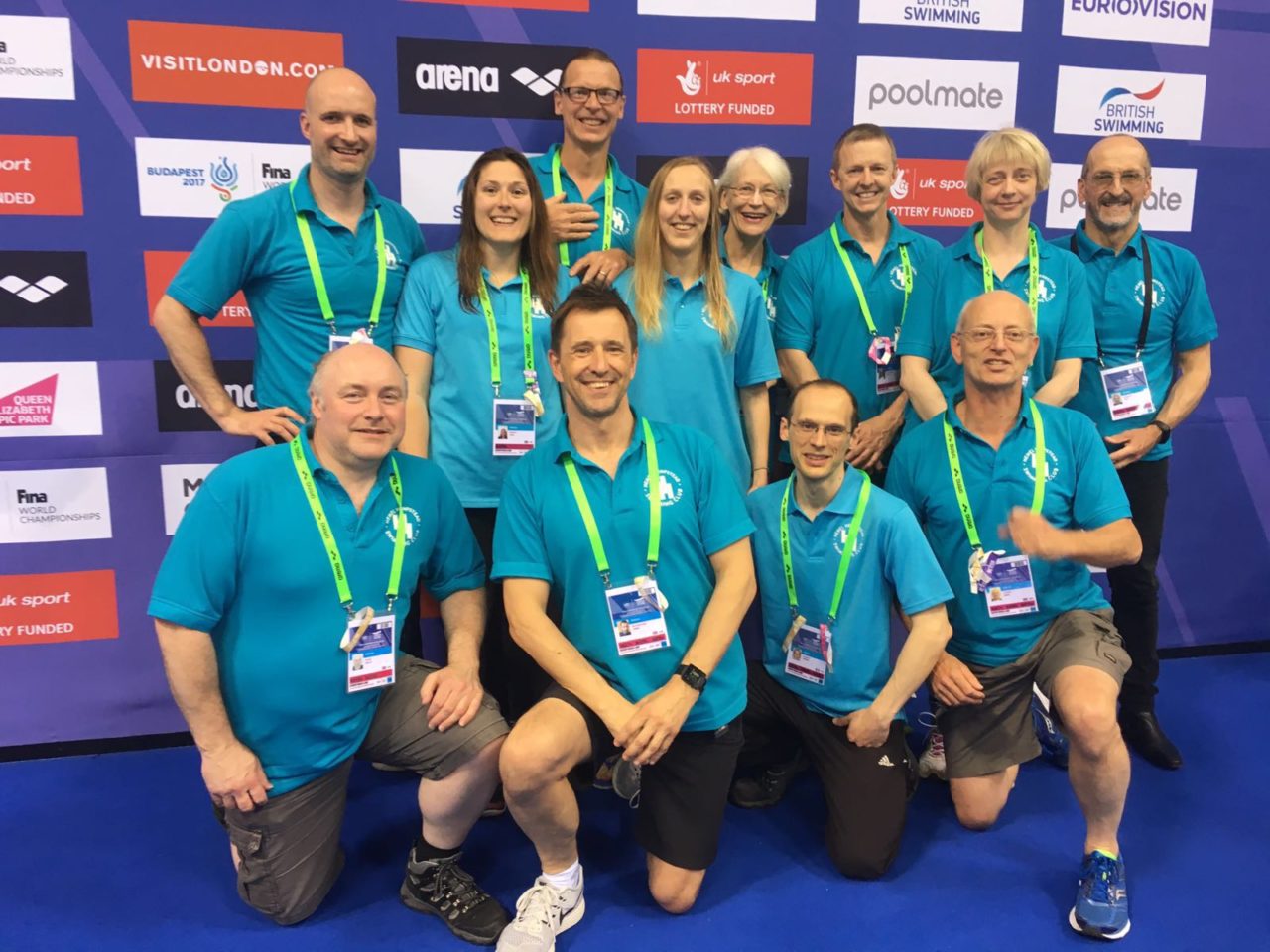 The lure of London proved strong and entries from over ten thousand athletes across Europe resulted in swimmers being restricted to just three individual races apiece.

Mike Foskett opened HHSC’s account on Day One with an impressive early morning swim in the 200m IM. Competing in the 60-64 age category, Foskett’s time of 2.47.63 set the bar very high indeed, placing him tantalizingly close to the medals in 4th place. His time earned him the number one spot in Great Britain. It was also fast enough to break the HHSC club record in the all-encompassing age group of 25 and over and set a new East Region record for 60-64 yr olds.

Tony Gaines swam next with a personal best in the 200m IM in the 45-49 age group, with Jerome Charpy’s PB placing him just outside the top 50 in the competitive 40-44’s.

Day Two saw the organisers swamped by numbers, with poorly managed queues resulting in some swimmers, including HHSC’s Dave Pirrie and Jerome Charpy, having to proceed straight to the call room without a warm up. Nevertheless, Pirrie’s time of 36.67 won his heat and placed him a very creditable 27th in the 55-59 age group and Charpy swam just one hundredth off his entry time. Tim Willson, 35-39, spent over two hours in the queue but went on to win his heat in an entry beating time of 36.54. Meanwhile, for the ladies, Annette Thatcher swam to an impressive 13th place in the 60-64 age group, posting the second fastest time from Great Britain.

In the evening, the first of the relays got underway with Hannah Bennett, Heidi Gibbens, Beverlee McKenna and Annette Thatcher tackling the womens’ 4x50m freestyle. Bennett opened the race with a blistering sub-30 second PB of 29.95 in the first leg, breaking the club record and setting up the team for a strong 2nd placing in their heat. The men’s team of Kevin McKenna, Tim Willson, Mark Ayres and Jerome Charpy followed suit to finish 3rd in theirs.

Forewarned of the queues, Hemel’s swimmers arrived early on Day Three. Beverlee McKenna was first out, competing in the 50m backstroke in the 50-54’s where she swam to within 0.10 of her entry time. Brother Kevin secured 27th spot in the same age group and broke the club record in 34.08.

Swimming in the 100m breaststroke, Mark Ayres opened his individual account in the 60-64’s with a strongly placed 22nd, followed by Dave Pirrie who improved on his 27th in the 50m to secure 26th in the 100m. Heidi Gibbens made the top 50 by swimming over a second inside her entry time in the 25-29’s.

Hemel fielded two teams in the mixed medley relays, with Foskett, Thatcher, Ayres and Beverlee McKenna winning their heat. Bennett, Gibbens, McFarlane and Kevin McKenna followed, with McKenna closing the day on a super fast time of 27.52 in the freestyle leg.

Foskett was back in the water on Day Four in the 200m backstroke, finishing 5th and, once again, posting the fastest swim from GBR. His time of 2.43.42 was another club and East Region record. Hannah Bennett destroyed her entry time to come a highly commendable 11th in the 25-29 200m backstroke in 2.38.40.

Matthew Rafiq-Craske and Phillip Isles opened their championships in the 45-49 years’ 50m butterfly, both hitting around their entry time mark, with Jerome Charpy shaving 0.37 off his. Claudia Cruttwell also started her account with a swim in the 50m butterfly 50-54’s.

The team came out in force for the 100m freestyle. For the ladies, Annette Thatcher comfortably surpassed her goal of breaking the 1.20 barrier with a time of 1.18.27, which placed her 11th overall and broke her own East Region record. Hannah Bennett scored a lifetime PB with an impressive 1.05.49, also breaking the club record. Heidi Gibbens broke her entry time by over a second. Mark Ayres made the top 30, while Kevin McKenna broke his second club record with a 1.04.83. James McFarlane, 45-49, opened his competition by swimming a 1.06.55, almost two seconds faster than at the previous European Championships in Eindhoven. Matthew Rafiq-Craske hit the wall just four hundredths shy of his entry time.

The 4x50m mixed freestyle relays were certainly not for the faint hearted, re-scheduled to finish well after midnight. HHSC fielded three intrepid teams, Anna Belsey joining in for her first swim of the championship. Despite the late hour, James McFarlane swam a long course PB in the first leg for his team and Kevin McKenna finished off a very long day with another mid 27 swim.

Day Five began early for Heidi Gibbens and Mark Ayres who were back in the water for the 200m breaststroke at 7.30 am, after catching just a few hours’ sleep. Undeterred, Ayres swam to 17th spot, while Gibbens broke the club record in a time of 3.04.89, finishing just outside the top 30.

The ever popular 50m freestyle followed, in which Annette Thatcher swam her best race of the championships. Seeded 13th, she broke the 33 second barrier with a 32.90 to come within a hair’s breadth of a medal, missing bronze by an agonizing two hundredths of a second and setting a new East Region record.

Anna Belsey, 40-44, swam her sole individual race in a low 35 to come second in her heat, with Claudia Cruttwell improving on her time from the relay to win hers. For the men, Kevin McKenna and Phillip Isles put in solid swims, with Tim Willson outstripping his entry time to dip under 30 seconds with a 29.96.

Next up was the 100m backstroke. Mike Foskett was seeded 4th going into this, his last event. Despite swimming one and half seconds faster than his entry time, he finished just shy of bronze once more, holding onto his 4th seed. Foskett’s 100m backstroke time of 1.14.50 not surprisingly saw a third club record fall to him.

All three of Foskett’s swims, along with Thatcher’s two freestyle swims, put them top of the European Rankings for a 1952 birth year, which bodes well for the next couple of years, when they will be amongst the youngest swimmers in the next age band up.

Beverlee McKenna was first on the turn in her 100m backstroke and, despite injury in the build up to the championships, finished comfortably inside her entry time with a well paced race.

HHSC rounded off the championships with three medley relays. McKenna, Willson, Charpy and Gaines finished second in their heat, Charpy taking almost a second off his individual time from the 50m butterfly and Gaines ending his competition in a considerable freestyle PB, even allowing for the anticipated relay takeover. Foskett, Ayres, McFarlane and Isles finished their campaign in style, as did the women’s foursome of Thatcher, Gibbens, Belsey and Cruttwell.

With a raft of personal best times, eight club and three East Region records broken, the championships were a big success for HHSC, not to mention an unforgettable experience. Many thanks to Masters Coach, Paul Mackie, for his time and expertise, which helped his swimmers go above and beyond their previous limits. Next up, World Masters 2017 in Budapest: watch this space.

Thanks to Claudia Cruttwell for pulling this report together, other than for inexplicably failing to mention the well-earned post-competition curry celebration!