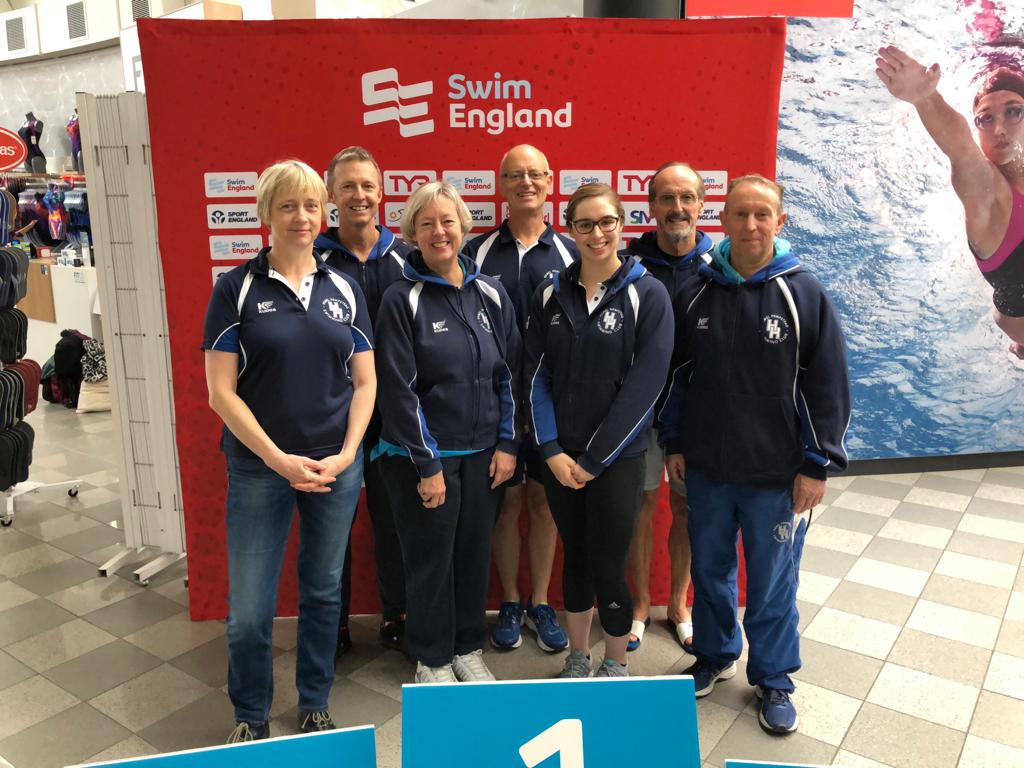 Top of the medal charts was Mike Foskett, competing in the 65-69 age group, who medalled in every one of his eight events. Claiming gold in the 200m backstroke and 100m IM, he set a new East Regional Record in the latter in a time of 1.16.18. Two further East Region records fell to Foskett on his way to silver medals in the 100m backstroke in a time of 1.15.61 and the 50m butterfly in 33.05.

Dave Pirrie in the 60-64 age group also claimed an East Region Record, along with the bronze, in the 50m breaststroke, touching home in 35.86. The breaststroke specialist went on to scoop silver in both the 100m and 200m events. Pirrie also made it into the top ten in the 100m IM and 100m freestyle.

Kevin McKenna, 50-54, knocked a staggering three seconds off his previous personal best in the 100m backstroke to finish in 7th place. The seasoned sprinter came ninth in the 50m backstroke and put in a flurry of quick times in in the 50m and 100m freestyle and 100m IM.

Mark Ayres completed Hemel’s line up in the men’s events, claiming 7th places in the 60-64 age group 50m butterfly and 100m breaststroke, as well as posting strong performances in the 50m breaststroke and 50m freestyle.

The combined Hemel foursome of Foskett, Pirrie, McKenna and Ayres was a force to be reckoned with in the relay events. The team set a new East Region record in the 240plus age group 4x100m IM relay, with Foskett kicking off on the backstroke, Pirrie pulling away on the breaststroke, Ayres taking on the fly and McKenna seeing them home with the freestyle to top spot on the podium. McKenna’s super fast anchor leg in the men’s 4x50m freestyle relay brought his team home to second place and smashed another East Region Record. The foursome picked up their third medal, a silver, in the 4x50m medley.

Lois Moore, competing in the 18-24 age group, ensured it wasn’t just the men who took all the spoils. She secured the gold in her 200m freestyle in a strong and comfortable looking swim and a time of 2.11.58. Her text book underwater phase saw her narrowly miss out on a medal by a mere five hundredths of a second in the 50m backstroke and in the 100m freestyle the bronze evaded her by another slim margin. She swam to fifth in the 100m backstroke.

Bev McKenna claimed a new personal best time in the 50m backstroke to finish eighth in the 55-59 age group. She joined forces with brother Kevin, Mark Ayres and Claudia Cruttwell to get amongst the mix in the mixed 4x50m freestyle relay. Cruttwell and McKenna added further outings in the women’s 50m individual freestyle.

With medals and records galore, the small band of Hemel masters punched well above their weight and proved their worth amongst the fastest masters swimmers in the country.