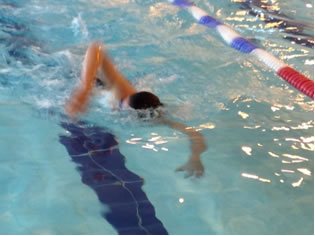 Tom Sherriff our Boy’s Club Captain undertook a sponsored swim on Bank Holiday Monday to raise funds to allow him to go on a Volunteering Expedition to Tanzania this summer.

He has committed to go on a month long trip and will be part of a group of volunteers working alongside the local community near Moshi, focusing on improving education facilities for local children. He has to raise £3,500 to go on this Expedition and as part of this he was aiming to swim at least the equivalent height of Mount Kilimanjaro and hopefully back down again (this would equal about 480 lengths). Mount Kilimanjaro is near their base camp and is almost 6km in height, the highest point in Africa.

He had 4 hours at Hemel Sportspace to try and complete his target but actually managed to complete it in 3 hours including finishing the last length on Butterfly, rounding it up to 500 lengths with his swim down. So in Mount Kilimanjaro terms he had climbed up and back down and had started on a second ascent. To put this in perspective it is the equivalent of completing the 3 Peaks challenge twice or up and back down Ben Nevis 4.5 times.

He was very grateful to everyone that has sponsored him and supported him with this challenge and is now focusing hard on preparing for his expedition.